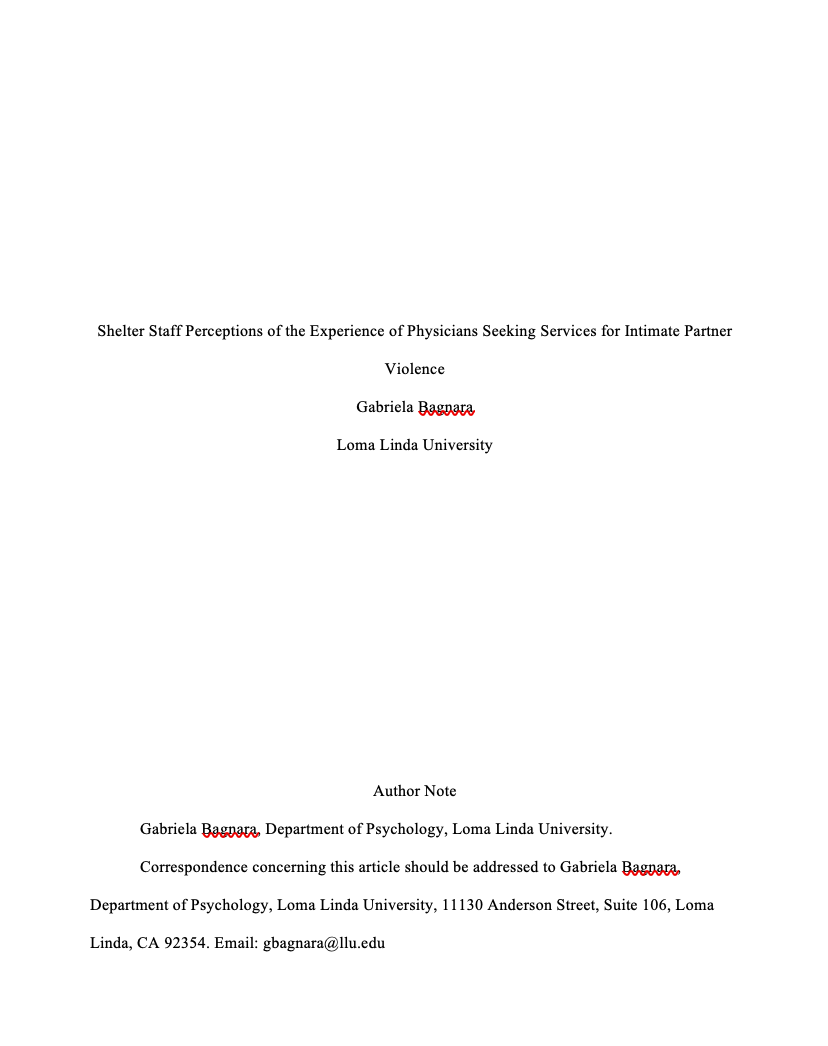 Research has demonstrated that there are a significant number of instances of intimate partner violence (IPV) in the United States, with current prevalence rates estimated to be impacted by a substantial amount of underreporting due to factors such as stigma, difficulty in disclosing, and complex love and fear of abusive partners (Breiding et al., 2014; Ellsberg & Heise, 2005; Overstreet & Quinn, 2013). A large body of research exists about the topic of IPV more generally, but there is little understanding about the help-seeking behaviors of high socioeconomic status (SES) individuals within IPV shelter systems. While several studies have demonstrated the equal impact of abuse across demographic contexts, including race, SES, and marital status (Satyen, Rogic, and Supol, 2018; Cunradi, Caetano, & Shafer, 2002; Haselschwerdt & Hardesty, 2017), a larger body of research indicates that members of lower SES and minority communities are impacted by abuse at a disproportionate rate (Cunradi, Caetano, & Shafer, 2002; Panchanadeswaran & McCloskey, 2007). Most of the literature aims to examine these populations’ experiences with violence and abuse, thus there is a gap in research in understanding patterns of IPV in higher SES individuals, specifically delving into the alternative sources of support and potential barriers to seeking services for this demographic (Tolman & Raphael, 2000). This study aims to identify the unique needs, experiences, and previously held assumptions of higher SES individuals experiencing domestic violence. A particular emphasis will be placed on the experience of survivors of abuse who identify as physicians that also provide care for this population.  A unique interplay of physician characteristics, hospital culture, and the unique needs and challenges of higher SES individuals serves as the backdrop for a qualitative study aimed at gathering further information on the experience of these individuals in a shelter context, through interview data collected from shelter staff. While this study is exploratory in nature, the authors held the a priori assumption that few physicians would utilize shelter services due to significant barriers impeding their ability to help-seek based on aforementioned previous literature, including shame, stigma, and the culture of the healthcare environment.

Shelter Staff Perceptions of the Experience of Physicians Seeking Services for Intimate Partner ViolenceDOCX • 117KB
A Meta-Analysis of the Literature on the Impact of Problem Solving on Internalizing Problems
A Mental Health Needs Assessment of Low-Income Students Attending an Alternative High School: Qualitative Findings
Exploring Resiliency Effects of Growth Mindset in Education