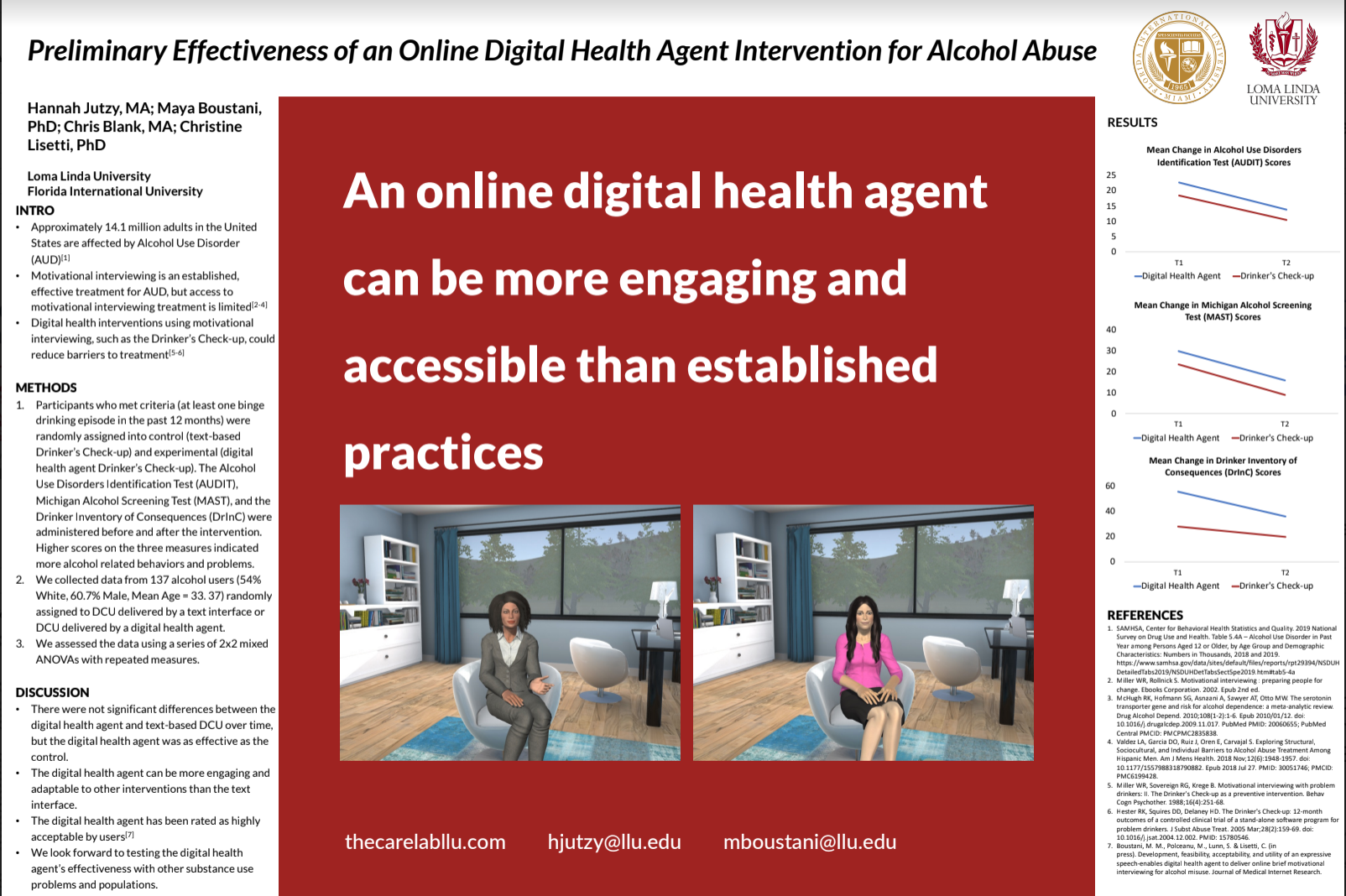 Alcohol Use Disorder (AUD) affects approximately 14.1 million adults in the United States. Excessive alcohol consumption is linked to a number of poor outcomes, including liver disease. The cost of alcohol misuse in the United States is staggering, costing society hundreds of billions of dollars per year. Motivational Interviewing (MI) has been established as an effective treatment for AUD across several delivery mechanisms, but access to evidence-based MI treatment is limited. Digital health interventions are an effective and useful tool in reducing barriers to treatment. In this study, we used a 3-D animated online digital health agent to deliver a brief MI intervention (the Drinker’s Check-up – DCU) with the intent to treat alcohol abuse.  The agent uses multiple modalities to communicate with participants it interacts with: it greets participants, asks questions with synthetic voices, recognizes participants’ spoken answers, takes answers entered via the keyboard and mouse, and uses appropriate nonverbal gestures and facial expressions congruent with the verbal messages as it interacts with users in real time.
Participants were 137 alcohol users (N = 137, 54% White, 60.7% Male, Mean Age = 33.37) recruited online and randomly assigned to DCU delivered by a digital health agent (N = 68) or DCU delivered via a text interface (no digital health agent or animation – text-only control; N = 69). The Alcohol Use Disorders Identification Test (AUDIT), the Michigan Alcohol Screening Test (MAST), and the Drinker Inventory of Consequences (DrInC) were used to identify alcohol use and related consequences directly after the intervention and three months post-intervention. We hypothesized that participants in the digital health agent intervention would report significantly lower scores across time than those in control conditions on each scale. Participants in both groups reported lower scores across time on the AUDIT, MAST, and DrInC measures (p < .001). While there were no significant differences in scores between groups across time (p > .05), a qualitative study of the participants’ subjective experience and acceptance of the agent showed higher acceptance of the agent versus the text-only delivery of the DCU.
While there were not significant differences in performance over time, an online digital health agent can be more engaging than established controls and more accessible than traditional therapeutic approaches. Additionally, the digital health agent could be used as an intervention for health behaviors other than alcohol use, such as medication compliance. The online digital health agent was as effective over time as an established control in reducing alcohol use and problems relating to alcohol use. Data analyses will be continued to evaluate the intervention’s effectiveness in other domains of alcohol use and behavior change.